He’s our newest rescue dog, and it has been a joy watching him come out of his “shell”. 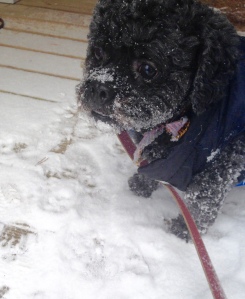 They had a little bit of a love/hate relationship in the beginning, but thankfully they are good buds now! 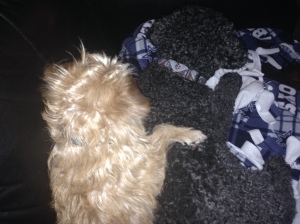 It’s amazing how God uses these little furry guys to teach me about life.  We don’t know anything about Jack, other than he’s about 4 years old.  When we adopted him a couple of months ago,  he was scruffy and super skinny and looked like he had a rough start to life.

We’ve had the joy of watching him grow into a beautiful, healthy, loving boy in the last couple of months. One of the things I love most about Jack is his perseverance.

to keep him away from you, baby!

When Jack wants something, he is relentless.  He will stop at nothing to get a bite of whatever awesome snack we are eating.  When he want to jump up and give you his famous 10 second snuggle, it’s like he’s competing in the Olympics.  Those little legs leap as high as they possibly can, and sometimes he hits the mark.  Other times he falls short and misses…but he doesn’t let it stop him!

He keeps his eyes fixed on what he wants and he perseveres until he succeeds.

“Lord, this scares me, yeah

So what if it costs me everything

I want to have faith like that.  I want to be able to take that “leap”  like Jack does- without any fear or doubt, knowing that it’s His strength that will get me through.  When we’re continually seeking Him and His will- He is always calling us to do something…asking us to go deeper- to depend on Him more.

So what are you waiting for?

Take the leap of faith and trust Him.

God, help me to have crazy faith

One thought on “take the leap”